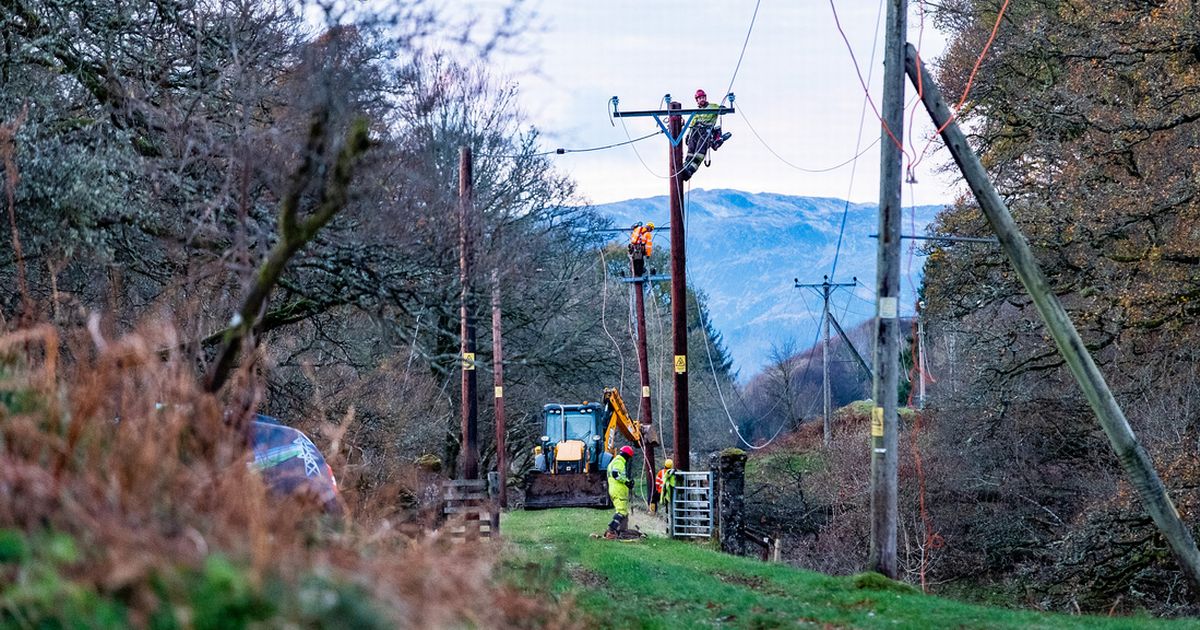 There were still 25 properties in rural Stirling without power almost a week after supplies were knocked out due to Storm Arwen.

Scottish and Southern Electricity Networks (SSEN) have been working to reconnect customers to the networks after the outage struck on Friday night.

The energy firm is encouraging customers still without power to take up support with accommodation and meals as engineers battle to repair the supply.

However, yesterday (Thursday) 25 customers in the area surrounding Callander were still left in the dark.

The energy firm on Wednesday confirmed that, as of 12pm, power has been restored to over 121,150 customers across Scotland since Friday, with the majority of villages impacted now back on supply.

A spokesperson said that 6,400 customers currently remain off supply, mainly located in more rural and isolated communities, including 200 in Stirling, as well as 3700 in Aberdeenshire, 1022 in Moray, 1178 in Angus and 300 in Perthshire.

By Wednesday evening, 93 homes in the area surrounding Callander were facing a sixth night without power as temperatures were set to plummet.

Whilst SSEN expects to make further progress, for some customers where overhead network infrastructure connects a single house or group of houses, restoration times were to extend beyond Wednesday and it’s understood it could take until Friday before a fix is put in place.

Click here for more news and sport from the Stirling area.

Storm Arwen resulted in more than five times as many faults as any previous weather event in the area in the last 20 years.

Chris Burchell, SSEN’s managing director, said: “Whilst our teams continue to make good progress carrying out repairs and restoring power to homes, due to the extent of damage and complexity of repairs our teams are dealing with, unfortunately restoration times for more remote and isolated communities will extend to later this week.

“We therefore encourage all customers who remain off supply to consider our welfare provisions, which we hope will go some way to help them deal with what remains an incredibly difficult situation.

He added: “I would also like to extend my heartfelt thanks to our local and national resilience partners and stakeholders – including local community groups and charities, local and national governments and elected members – for their continued support and help in responding to the impacts of Storm Arwen.”

Welfare provisions have been out in place for residents still being affected by the outage.

Any customers without power and unable to make alternative arrangements to stay with family or a friend will be reimbursed by SSEN for all reasonable costs for alternative accommodation.

Customers can also continue to access SSEN’s welfare facilities for free hot food and drinks, as well as claim the cost of takeaways or meals from local establishments, up to £15 per person.

Other reasonable costs incurred by customers impacted by Storm Arwen will also be considered and customers are asked to retain their receipts in order to obtain reimbursement.

SSEN have been working alongside Stirling Council to help co-ordinate the community response.

SSEN had established a rest centre at Thornhill Primary, between 5pm-10pm, which was stood down yesterday evening.

Stirling Council has also made the McLaren Leisure Centre in Callander available as a welfare centre until 10pm.

A multi-agency volunteer group led by the council on Tuesday conducted an extensive door-to-door welfare check in the affected areas, passing on information regarding respite at Thornhill and McLaren.

The Observer understands that the Scottish Fire and Rescue Service made welfare checks to residents living in the Brig O’ Turk area in Tuesday evening.